I said in my last post that as much as I would like them to, PBs were not going to happen in the races I had planned for the rest of summer / autumn. And true enough, there was no 5-mile PB for me in the Joy Cann 5 yesterday. However…

But lets start from the beginning:

As you might expect after the tone of my last post, I approached the race with no expectations and hardly any planning (“don’t go silly in the first mile; keep strong in the last” was the extent of my “race strategy” / wishful thinking). A particularly distractful day working from home meant I was also completely in the wrong frame of mind, and Philip getting sick in the car just as we pulled into the Pavillion car park didn’t help my mental preparation much either!

But the evening was pleasant, bright and with just enough of a breeze to cool you down without creating a headwind; we changed Philip into clean clothes in no time and we had settled into our by now comfortingly familiar pre-race routine: collecting my race number, making sure Philip was comfortable in his pram, arranging where we’d meet afterward etc. By the time we separated (Demi and Philip to visit our neighbour from when we lived in Huncote; me to warm up and head to the start) I was feeling much more in the moment: And as soon as I broke into a jog in the fields behind the Pavilion and felt the evening breeze on my face, all the fatigue, distraction and self-doubt washed off me and I felt like a runner again. Not a fast runner you understand, but a runner nonetheless!

The event itself was as perfectly organised and brilliantly executed as usual, a true credit to the work Jane Benson, the new race director, and all volunteers had put in. The support on the course was also great, and with all the familiar faces and shouts of encouragement to anyone in a Huncote Harriers vest, you could tell it was our club’s home race! My favourite supporter (after Demi and Philip of course) must be a young girl holding a large colourful “Pump it Harriers!” placard and shouting “Come on Harriers! You are going to win!” to us in the middle of the field, just a mile in! 🙂

But back to the start: After an unusually vigorous race brief, interrupted however every time a car headed out of the car park at which point Chris who was briefing us had to climb down from his little ladder, fold it up so the car could pass and climb back on to continue warning us, in a sergeant-major-on-parade voice, of the perils and precise spacing of road humps, we were off! 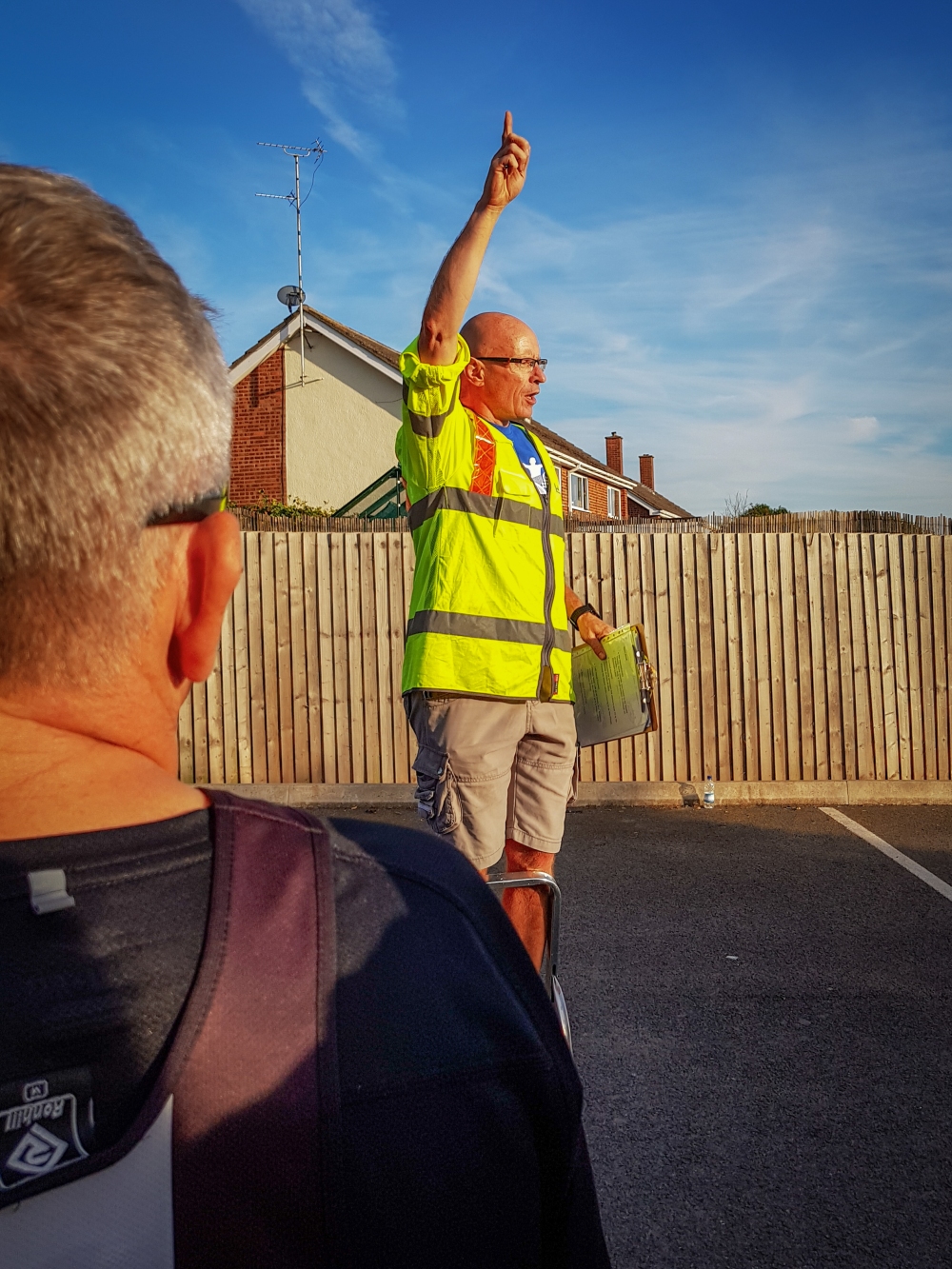 I spent the first couple of kilometers trying to run just within myself, remembering how I began flagging half way through last year. That meant that other runners were passing me over the first mile, but I was fine with that: some would be genuinely faster than me (I spent the first half of the race seeing Trudi gradually disappear into the distance), some would come back later in the race (I started regained places at the top of Hardwick Road hill) and others, like Conrad, I would run with trading places for some distance.

I had a rough idea of my average and best pace for the course, but haven’t set my new watch to show average pace over a workout yet, so I didn’t know how my run compared. I caught glimpses of my current pace, especially at the beginning to keep my effort under control, and autolap gave me average over each km, but on an undulating course that doesn’t say much. Still, knowing I wasn’t anywhere near peak fitness I was less concerned with times and more with feel: and as I approached the half way mark I was feeling strong: I had settled in pace which was both demanding but that I felt I could keep up for the duration, and was beginning to overtake people again. I was particularly pleased when spotted Lance ahead, whom I had lost after the first mile, as he is a strong runner and while it used to take a sprint finish to decide the place between us in a Parkrun, he has recently been consistently faster than me: So to stop him from pulling away and close in on him was quite satisfying: then again I suppose I am not the only one who has let his fitness drop over summer holidays! Edging past him was the confidence boost I needed as I entered the second half of the race, with its little hills and straights-that-feel-uphill that come before the last downhill mile.

The weather was on our side as well, and after a week of record temperatures, followed by a weekend of heavy rain and strong winds the weather on the day was like Goldilocks’ third bowl of porridge: just right!

I approached the last couple of miles in a much better state than I was last year. I had settled into my pace, had a trickle of tired runners come back to me, but the next group was quite a distance ahead and they were running strong. There were two Harriers in that group, but I had been tracking them for a while and I knew they were just out of reach. On the other hand I could hear that someone had followed me past the runners I had just overtaken, so I concentrated on keeping a steady pace to the end, finishing strong and timing my final sprint right.

As I approached the 4 mile marker, I could hear that the runner behind me was quite close now, and realised he was holding station aiming to go past me with a mile to go. He was faster than me, so I knew that trying to race him so far out would be a mistake I would pay for, and concentrated on holding my pace and thinking of picking it up sometime within the last kilometre, depending on my reserves. But he had other ideas:

“Come on!” he shouted as he pulled up alongside me “you can’t let an old bugger like me past!” Surprised more than anything else, I dully picked up my pace a bit, but he wasn’t having it: “look, it’s your team-mates ahead, you can get them!” I knew I couldn’t, but had no breath to argue. “They are struggling” he continued shouting, and I must have raised my pace without realising because his voice had become a bit more distant and the stragglers from the group ahead a bit closer: “you are looking strong!” was the last bit of encouragement aimed towards me as I caught up with said stragglers, before he turned his attentions to them!

My surprise had given way to gratitude (not for the extra places I was gaining; a bit for the seconds I was shaving off my finishing time, but mostly for the feeling of finishing a race strong), and then, as the faster pace was beginning to tell, feelings of self-doubt and paranoia: “it’s a trap!” I thought to myself: “he was spurring me on, only so I could blow up and fall back” the evil monkey on my shoulder was whispering, unaware of the absurdity of what it was saying.

The truth was that with half a mile to go I had caught up and mixed with the group which, a few minutes ago, I thought were too far away from me: but I also felt I had over-committed and had difficulty maintaining the pace to the end. Still, there is nothing like running strong at the end of a race and pushing for position to raise your competitive spirits, so I hung on and tried to stay with the leaders of that group, and pass as many as I could. Soon the only one remaining was a lady from Stilton Striders, who had kept stubbornly ahead of me as I was catching up and overtaking the others; I tried to get past her, but had to push as hard as I could just to stay with her as we reached the corner back to the Pavilion that would mark the final straight.

I’ve probably talked about it before, but sprinting at the end of a really hard effort is a mental task more than a physical one: your whole body hurts, you are out of breath, you notice the finish just too far for comfort, and yet you stop thinking (sometimes I think I stop breathing as well, but that can’t be right: still, it goes to show) and just go for it! In your mind you are flying, barely touching the ground, but of course in actual fact you are only running a little bit faster than you were. Still, it’s enough – just!

As approached the finish line I heard Demi’s voice calling and turned to see her cheering and Philip clapping from his pram, and that was the last boost of energy I needed to keep sprinting. Demi later told me that he was clapping for every runner making it home, which is yet another reason to be proud!

It tells of my fatigue at the end of the race, but also the detached state in which I ran it, that while I would usually immediately check my time on my watch, it took me almost a whole minute after I crossed the finish line to realise that I hadn’t even stopped my watch – so I had no idea of what my time was, how it compared with other years’ times or even remember what these other years’ times were! I even had to be reminded of my two-year old Course Best (CB) by Demi, because I had no idea of what it was. It took synchronising the results with Strava, cropping the bit after the finish and comparing it with past performances to realise that I had run one of my better races. Official results confirmed that I had improved my CB by a whole minute and was within 20” of my 5 mile PB (ran at peak fitness, on a pancake flat course).

So while the lack of PB was expected, the performance certainly wasn’t! My initial feeling was of enormous gratitude to the guy spurring me on for the last mile (looking at the results list, I think he is a Badgers runner by the name of Colin). And while I know logically, and my splits confirm it, that my performance was consistently strong throughout the course, and that the CB was earned over every yard of each of the 5 miles, the fact remains that if it wasn’t for Colin (if this is indeed his name), I wouldn’t have ran what must qualify for the best last mile I have ever ran in any race in my life!

I wish I could have him yelling in my ear for the last miles of every race I run in the future.

I wish my own voice yelling at me in my mind could have the same effect.

How do I do that?