“Respect to you marathon-running guys though; you can’t blag a marathon” were Alistair’s first remarks to us after he had completed the notoriously difficult Snowdonia Marathon for his first attempt at the distance. Or words to that effect at any rate: I was too busy trying to evade his gaze, because I felt that that was exactly what I had done. And that he knew it. He had run what is probably the hardest road marathon in the UK, on the back of months of gruelling training and immense dedication, while I was a fraud, who had somehow managed to blag it. And not just the once either!

By that time I would have run two or three marathons (the exact date when this incident took place escapes me), my first being Athens (not famed for being flat or easy!) which I completed in 3:52, then Coniston trail marathon (I twisted my ankle around the 3rd km, but hobbled up hill and down dale to the end – by the time I got to a marshal to withdraw I had started moving again, and I hated the idea that after all the training and excitement my race would be over so soon) and then (if I haven’t got my dates mixed) set a PB at Rome. A PB I wasn’t happy with (a, the folly of youth!), but a PB nonetheless.

And it’s not that I wasn’t proud of my achievements, because I was and still am. It’s just that at the back of my mind there was always this idea that I wasn’t putting enough effort in. I had always been a low mileage runner and comparing my weekly training miles with the club members who I considered trained “properly” made me feel like a job-shy lightweight! My strength and flexibility routines were an afterthought. Nutrition plan? A bowl of pasta the night before the race, and go easy on the wine.

But somehow I had gotten away with running a marathon, even though I hadn’t really put the work in. And only just managed to avoid being exposed for a fraud (all seven times I’ve “blagged” it). 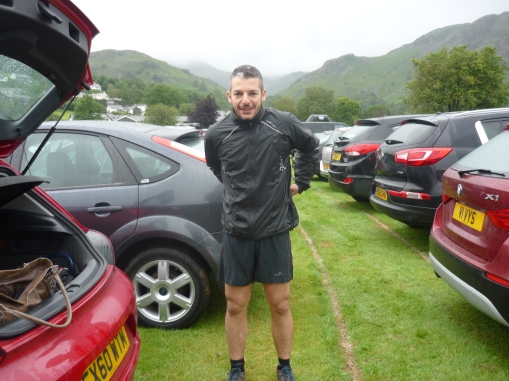 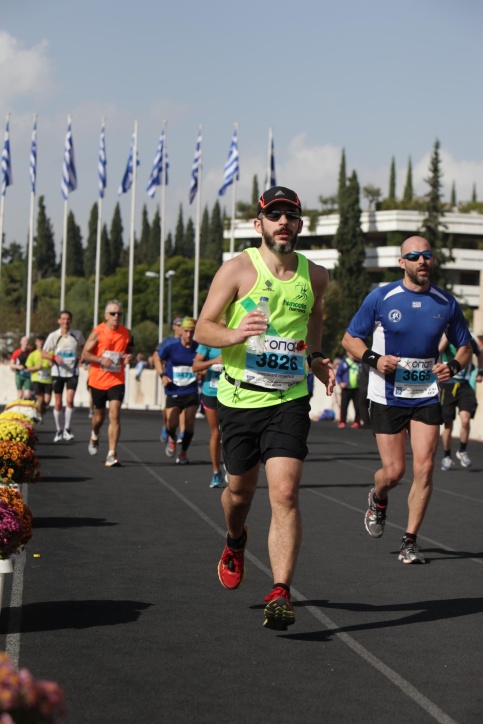 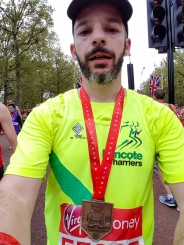 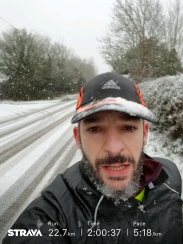 And it’s not just running either. In just about everything I undertake I’ve been hiding my incompetence and lack of effort under an ill-deserved veneer of competence and, occasionally, success.

Work is the same. Never mind that I leave home at 6 am and don’t come back till 7 30 pm, I am convinced I put less work in than the majority of my colleagues. And worse still, I know that I don’t really know my stuff and – you guessed it – am just blagging it!

A new dad!? Where do I start? Philip may still be too young to realise, but he will one day: Though from the way he looks at me sometimes I think he knows, deep down, that I’m only making it up as I go along!

And so it goes…

You can imagine my relief then, dear reader, when I came across this article on the BBC website, which suggests that I may not be universally incompetent, but instead suffer from a chronic case of the “impostor syndrome”: I thoroughly recommend you read the article, whether you’ve ever felt like a fraud or not (especially if not!), so I will avoid repeating what it says. But in essence the “impostor syndrome” or “impostor phenomenon” is the feeling that part of you knows that you are not as good as you pretend to be; that you are the only one amongst your peers in this situation; and that any moment now you are going to be found out! And paradoxically, the better you become in your particular field of endeavour, the more certain you are that you are, in fact, an impostor!

So now I think it’s time to stop hiding, come clean and fess up: I’ve gone through life blagging it, winging it, and relying on good luck and the naivety of others.

My successes were based on good fortune (my sister used to call me Gastone Gander, after the irritatingly lucky character from Disney’s Duck Tales), while the setbacks I have encountered (cramps in races, overdue promotions etc.) were all mine and proof positive that I am, in fact, an impostor and “they” (the gods of the marathon; my employers) were beginning to see behind my veil of deceit!

And above all, I was lucky to finish a marathon without putting the work in, all seven times that I did!

So why come clean now, and why publicly? After all, one of my 400+ thousand work colleagues might be reading this, and – more to the point – my wife most probably will: can you imagine what impact such a public admission of incompetence might have on future arguments about who should have put the bins out?

Firstly, because it was a huge surprise to read that it is such a common phenomenon! I was sure I was the only one who felt like this, in a sea of confident, competent and self-assured people. It seems that may not be the case, after all. So heeding the advice in the original article, I intend to spread the word:

If you are sufficiently self-aware to worry that you might be a fraud… you may well not be.

And secondly, I find that as I am going through life, I am becoming more and more accustomed to this feeling of lack of competence covered by an outward appearance of confidence. The only times when I – momentarily – felt I really knew my shit was when I also knew that it was time to move on. Feeling that there is more to learn, more to do and more to achieve is not a sign of incompetence: it’s what keeps me thirsty; what gets me out of the door for a long run on the hottest or coldest day of the year. Because I may not yet be the runner I dream to become, but this run will get me a step closer.

And because I have lived with the impostor syndrome long enough, and been propelled out of the door enough times by it, I know that it is my friend. It’s my self-doubt and – perhaps exaggerated – recognition of my own limitations, that stop me from being complacent, but instead drive me to improve.

And after all, if we had achieved perfect competence in everything we attempted, none of our achievements would really be worth anything, would they?

Perhaps you can’t blag a marathon, after all: but you can always run one better!