Looking back to my first post on what marathon training with a first baby was like, the main themes were sleeplessness, confusion and making do!

I am pleased to report that within a month or so, we have moved on significantly: Philip is much more settled and beginning to sleep through (most of) the nights, Demi is really getting the hang of being a mum, Dash is taking it all in his stride and we are really settling as a family; I’m sure the period of relative calm will not last, but we are enjoying it while it does!

Which means I’m more rested than I was, I no longer yearn for a nap after work, and I can get out of the house in the evenings and the weekends for my runs in good conscience, and confident in the knowledge that Dash and Philip are happy, and Demi on top of things!

The only snag is… I don’t really want to!

It is strange because I have always been someone to value some time by myself, and have found that the time I spend alone exercising helps me get the space I need to appreciate my relationships with others. But since Philip turned up, I somehow feel that real life is happening where he is, and so I find it very hard to tear myself apart and spend these days that won’t come back somewhere else (especially after I’ve been away at work all day)…

I feel silly even writing about it: after all, there are so many people with young children who have to spend time away from home for a multitude of reasons, and they don’t make a song and dance about it on some blog; but there it is.

My worst point was a couple of Sundays ago, when I was trying to do another Long Run with speedplay on the gym treadmill, watching a football match: It’s a combination that worked quite well in the past, as it takes my mind off the treadmill’s monotony, so two hours (with the build-up and break) pass before I even realise. Only they didn’t on that occasion: the fact that it was the last day of my paternity week didn’t help, and my mind was obviously somewhere else. I think of myself as a reasonably self-disciplined and resilient chap, but for the first time in my running career the little voice in the back of my head saying “I really don’t want to be here anymore!” had its way… I brought the treadmill to a stop half way through the workout, showered and went home under the cloud of my own disapproval!

The following week’s Long Run was a steady, longer one and as it approached, I was concerned about my commitment and whether I could see it through… mentally, not physically, which is a new for me in marathon training (on both counts!)

Fortunately I surround myself with madmen and one of these (not pointing any fingers, but it was Kyriakos) insisted we met at my old village at 7am to go for a long run along Leicestershire countryside (our training plans coincided that week). It didn’t take me long to agree (it seems that Kyriakos also surrounds himself with madmen!) so there we were, setting off a bit before sunrise, in the wind and rain. 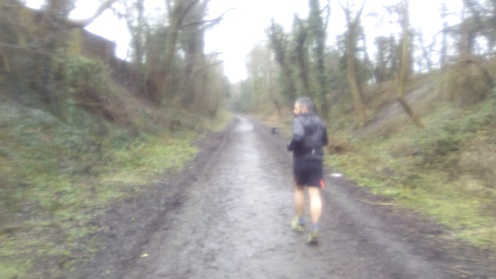 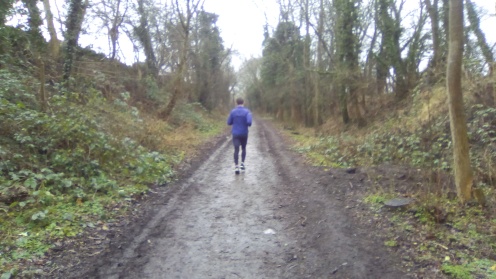 It was a lovely – if a bit grim – run, with the rain alternating with snow and the wind becoming quite stronger on the hills and the more exposed places. I found it quite hard physically, probably the combination of the weather and lack of breakfast: But once I had thawed properly under the shower, I loved the fact that it was only 10am, Philip was just waking up from his post-breakfast snooze and I had the whole day to spend with him and his mother (and Dash)!

So much so, that I decided to give this early morning running malarkey a go yesterday (Sunday) as well. My plan called for a 19 mile (30.5 km) run, and I had been dreading it all week: not only because of my homesickness and wavering resolve on the treadmill a couple of weeks ago, but also because for the past two and a half years (since Athens Marathon 2014), I have been suffering from cramps on every run over about 27km – 28km (remember my Nemesis?); they usually get so bad that I need to give up on my run, although in a couple of races (Ashby 20 in 2015 and Manchester marathon 2016) they went away with only some stretching and walking.

But you can’t run a marathon without going over 28km in training, so off I went, hydration pack on my back and taking it one step at the time. Quite early in the run I was surprised to notice that the kilometres seemed to be going by quite fast, and as it went on I still felt mentally and physically relaxed; my running was quite consistent, even towards the end. I remember a self-check at 25km when all felt well and again at 27, when I was surprised to discover that I was still strong and free from all but very minor aches. Looking at my run on Strava, it seems I even picked up the pace a bit over the final couple of miles!

I arrived home beaming and puzzled as to what exactly had happened – and how! I didn’t feel like I had just run 19 miles, I felt quite human! It seems that the hard runs on the muddy, slippery canal towpath, where I had to engage every muscle in my body just to remain on my feet, might have actually worked and helped strengthen me a bit!

And the best thing, Philip had only recently woken up again, so we had all day to spend as a family!

And what a boost to my morale, 19 miles feeling easy, and I still have a full month’s training before Ashby 20, and two months till London! Time enough for things to go wrong as well, but I am feeling positive today!