(Turns out running is the easy bit!)

In my previous post about getting back into training after a period of absence, I advocated taking every opportunity to add some runs and miles to your schedule, and said that I would look at running the last leg of my commute (from Euston station to the office, about three miles distance). I had meant to start a couple of weeks ago, but…

Well, the first time I was going to attempt it I realised that there was heavy rain forecast and, while I am a reasonably water-resistant runner, the backpack which would contain my work laptop, my suit and – perhaps most importantly – the towel which was supposed to render me dry after my shower at the other end, wasn’t!

After scouring the internet and outdoor shops for a backpack with a waterproof cover, decent weight distribution system and enough capacity to carry the essentials for a small expedition to one of the more sparsely populated areas of the back end of beyond, I realised… that I already had one!

But of course, the day after that realisation I had an important 9am meeting, which I didn’t want to risk being late for!

As the more prescient of you might be realising by now, the level of preparation but also of hesitation involved was not proportional to a 3-mile jaunt at a comfortable pace! There were two broad areas of apprehension: One was running with the load on my back, knowing that I didn’t have the option to bail out and walk or look for public transport, as that would mean making it into work late, sweaty and in running gear; not a good look during my probation period!

Then, assuming I got to work on time, there was the matter of finding the showers in the bowels of the office building I work in: this involved taking a guarded lift (which may or may not need a code to work, the advice was conflicting on this point) down to the upper basement, finding the facilities lift to the middle basement, walking down some more corridors and using your security pass on an unmarked door; showering, then reversing the journey to emerge back to reception before taking the normal lift that leads to the office space.

But on Monday night last week I finally ran out of excuses and felt bad for missing out on Sunday’s LR. So I stuffed my old day-hiking backpack with what I considered the bare necessities and tried it on for fit. Heavier than I thought! Still, how hard could it be, I reckoned, I’ve done hilly LRs with a large hydration pack on and sticking to a target pace, while this is just 3 gentle miles…

It turns out it made quite a big difference! I hadn’t weighted the backpack before the run (on purpose), but I can now reveal that it weighs in excess of 10 kg / 22 lbs. And believe me, they do make a difference, especially if the hip support keeps loosening and the rucksack jumps around your back like a rodeo cowboy as you run, while you are busy jumping off the pavement onto the road to avoid pedestrians and then back onto the pavement to miss cyclists and busses! I opted to look at the silver lining to that particular cloud, thinking that running with the extra load is bound to have some fitness benefits! Apparently it does, adding resistance to your run, and helping you build strength and burn more calories. There is a downside however: the impact your ankles, knees and hips have to absorb is greater, due to the additional weight, so watch out for discomfort in those areas, and above all don’t go silly with the weight! The advice I found on the internet is to restrict it to 10% of your bodyweight (although I carried about half as much again) and if you do increase the weight, do it very gradually. 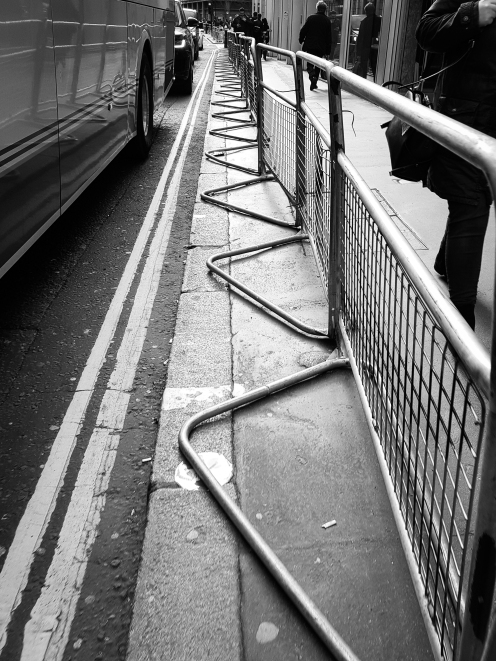 They are not barriers; they are a call for drills!

Detour through the park

Sisyphus and his load

Too fast for the camera!

In the end it worked out well enough, and it made me pay attention to my form: it is easy for your form to suffer when you add a weight you aren’t accustomed to, for example by stooping under the weight, bouncing about more… I focused on keeping my spine straight, perhaps increasing the angle from the hips a tad, and maintaining a decent cadence landing on the midfoot. Standard stuff then, it just makes you think of it a bit more.

Sisyphus is in the building!

And I can honestly say that I genuinely enjoyed it! I didn’t mind all the strange looks I got, not even when I joined the groups of smart people walking up the marble steps to our offices, and I got to the office in good time to find – and use – the showers, and make it to my desk nice and early. And hey, it beats playing vertical sardine in the rush-hour tube!

I also took some of my own advice about helping the brain to form habits through repeated behaviours, and run it on all three days that I travel to London; I thought about taking a rest day in the middle, to see how my body would react to the whole ‘running with a load’ thing, but I felt well and I prioritised forming the habit over undue (?) caution.

So I am feeling quite smug right now, with 3 runs / 14 km done at this stage in the week, when I thought my commuting wouldn’t allow me any! Which is why I read this post about run-commuting from a blogger I discovered recently (check her out, I love her writing!) to put my “achievement” in better proportion!