I am finding it surprisingly difficult to come up with something to write about the London Marathon: I thought that a few days would let my impressions and thoughts settle and help me express them in a coherent way, but all that has happened is that I seem to have digested them, let the moment pass and turn my attention to other things.

The whole weekend was a bit unusual for me, as all previous marathons have been a bit of a holiday, stretching to a long weekend or (in the case of Rome) a whole week away and involving Demi and as many friends and family as we could.  This time though it was just me travelling down on Saturday, staying with a friend overnight and travelling back up on Sunday afternoon, with just enough time for a quick shower before my return train.

I think this unusual state, and the desire to start Saturday fresh and not carry any baggage from the week with me down to London, led me to subconsciously live in the present, without thinking of the moment just gone, or the one about to come; and in a state of mild detachment from my surroundings.

For example, I remember waiting on the platform of our local Railway Station, basking in the sun, and feeling as if this was all I wanted from the weekend! Similarly, when I met up with the friend I was staying with, I enjoyed his company and my mind wasn’t wandering from the moment: yet there was still a small part of my consciousness that was a bit disengaged from the present and just sitting back, doing the mental equivalent of relaxing on the surface of the sea, concentrating on its breath before a deep free dive. I haven’t dived in many years, but some habits seem to have stayed with me! 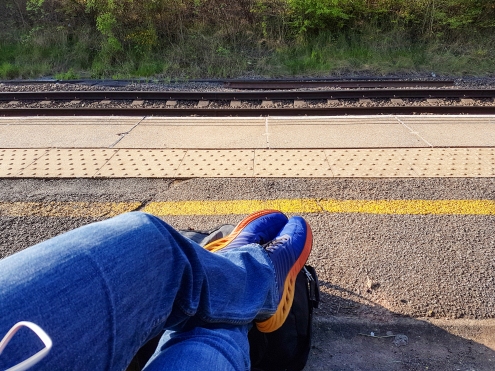 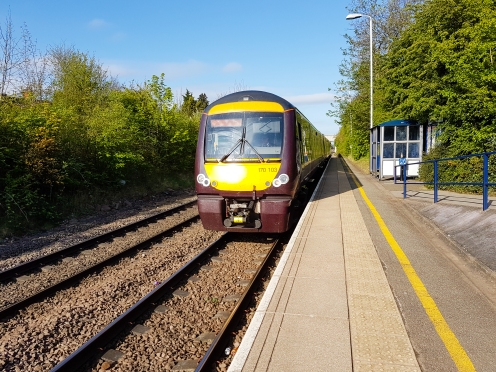 I took in the sights and crowds of the Docklands Light Railway and the Expo in this state of detached interest, but I did at least try to take in some of the atmosphere of the Expo, without adding too much to the time spent on my feet; already it was going to be much more than I would ideally like for the day before the race. Still, I bought a couple of mementos for Demi and Philip, and I loaded up with flyers for marathons that sounded like a good idea at the time, but which I am unlikely to ever race!

As I was walking out I bumped into a Huncote Harrier contingent, which was quite a co-incidence considering the numbers of people flowing through the Expo at any given moment, and it was nice to exchange a few words with familiar faces.

I spent the rest of the day with Niko, taking it easy, having lunch in a Brazilian-themed restaurant close to his where he lives before going home, resting, preparing everything for the next day and then going out for the obligatory pasta dinner! 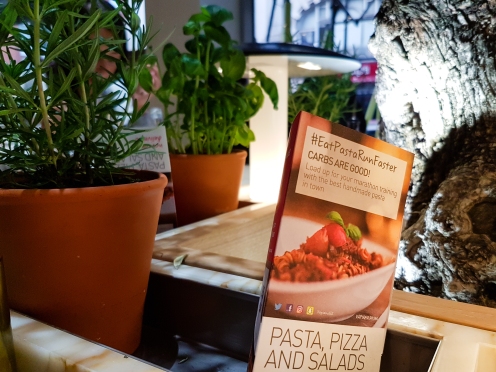 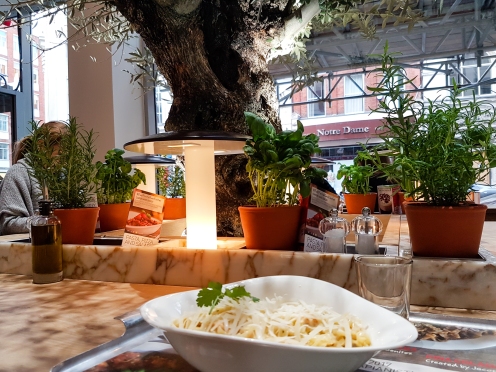 Sunday morning was like any marathon morning: early alarm clock, double portion of porridge and coffee for breakfast, numerous visits to the toilet (just to be safe!) and triple-checking my kit bag (again, just to be safe – I had actually dreamed that I had travelled to the start area without my running shoes!) before setting off on the hour’s trip to Greenwich. Along the way more runners with the same transparent kit bags made their appearance, some alone, others in groups or with supporters; their faces relaxed, concentrated, nervous. I fell in with a couple of them, one of whom had sat through some advice lecture in the Expo (it was going to be her first marathon): I smiled as she explained that the most important tip she got was to wipe the snot from her face as she approached the finish line, so her finisher photos would come out nice – after all, you will use them for Xmas cards, she was told!

It was a beautiful morning, not too cold to hang about before the race, but not too warm to run in either, and the walk from the DLR station to the start area was pleasant (Greenwich seems a beautiful place!) and done in great spirits. I even bumped into a hero of my local (Braunstone) ParkRun: Nessa the Nurse, and Anthony Chapman the runner inhabiting her! Another pleasant reminder of my little corner of the running world, and I made a point of saying hello, shaking his hand and wishing him a great race! 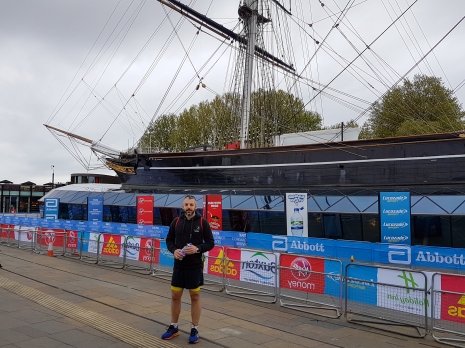 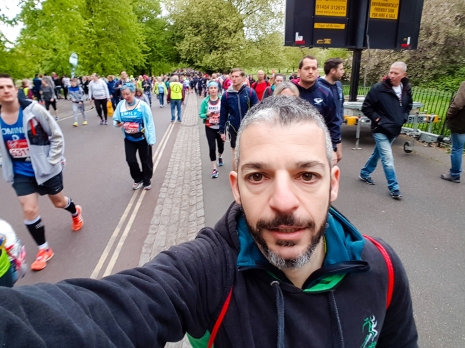 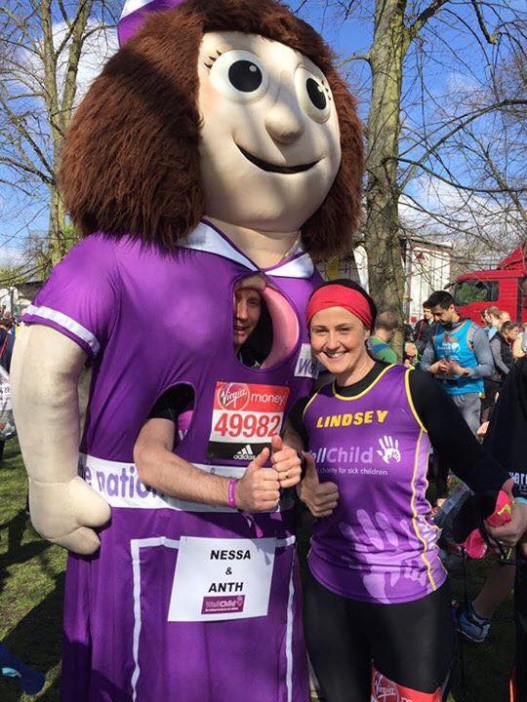 After a brief recce of the starter area (portaloos, baggage drop off, free coffee station and start pen, in that order!) I found a nice spot under some trees and, in keeping with the “relaxed solitude” theme of the weekend, plonked myself until the very last minute before having to change into my running shoes, pack anything I wasn’t going to run with in the bag and hand it to the appropriate lorry. 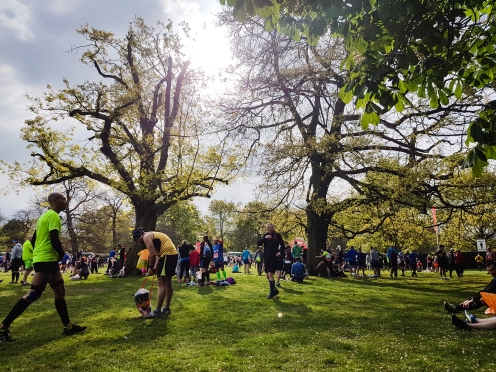 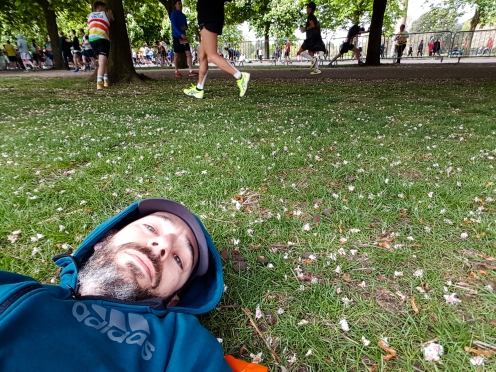 I have to say that I was impressed by how well the record number of runners dispersed in Greenwich Park, which was obviously busy but without feeling crowded. The portaloo queues were of course there, and they grew as the time passed, but they never looked unusually long or slow-moving.

And before I knew it, it was time to find my place in my starting pen and wait for the horn! I was in Pen 3, and we set off just three or four minutes after the official start of the race, which was quite good and much faster than I had feared!

And so we were off…

The first few miles are generally downhill (there are two serious downhill sections with only one smaller uphill between them), but I was determined to control myself by both pace and effort (I have a working heart-rate monitor once again, and I am making full use of it!) till at least the half-way point and then take it by feel from there. Perhaps for the first time ever, I wasn’t worried about finishing in a certain time: It would probably be my only opportunity to run London so I wanted to enjoy it, take in the atmosphere and not do anything rash that would mean that the final stages would become a complete sufferfest and suck all fun out of the day!

I will avoid a step-by-step narrative of the race (it all tends to blur into one, to be honest), but the things that stood out for me were: 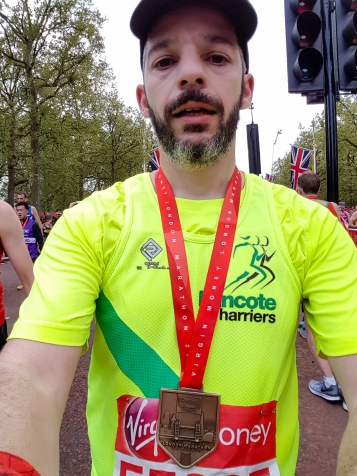 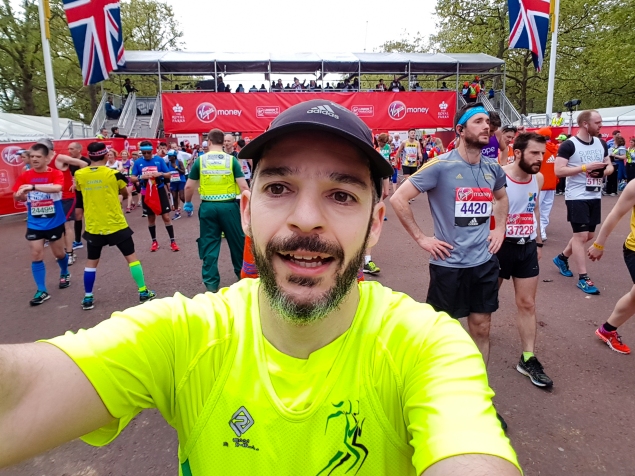 The second feeling that hit me after that elation, was that it was over… “That”: the endless miles of the marathon, the endless weeks of training, the uncertainty of whether I could see either through… Mixed emotions of relief, satisfaction and – a step behind these, anticlimax and regret I think.

I walked (very slowly and painfully!) to the lorry which contained my bag, spoke to Niko to arrange where to meet, and spent a few minutes sitting on the grass in St James’ park amongst groups of people, runners all, and their friends or family. I admired the medal I had earned, winced at the sight of the finisher t-shirt (a lovely technical t-shirt, ruined by a huge stamp at the chest: meaning it had lost most of its breathable qualities, would stick to your body when you ran, and so can’t really be worn to exercise in) and waited till my legs had recovered somewhat till I got up and met up with Niko.

We took the scenic route home, by bus rather than the Underground, and it was nice to sit on the top deck, glowing in the sense of achievement and watching London slide past the window…

Back at Niko’s, I had changed, showered and packed my bits and pieces in my bag in ten minutes flat, and was on my way to St Pancras again… but with one stop along the way, because when I say that I lived that weekend in the present moment, I haven’t been entirely truthful… There was one moment on Sunday evening that I had been dreaming of for weeks: 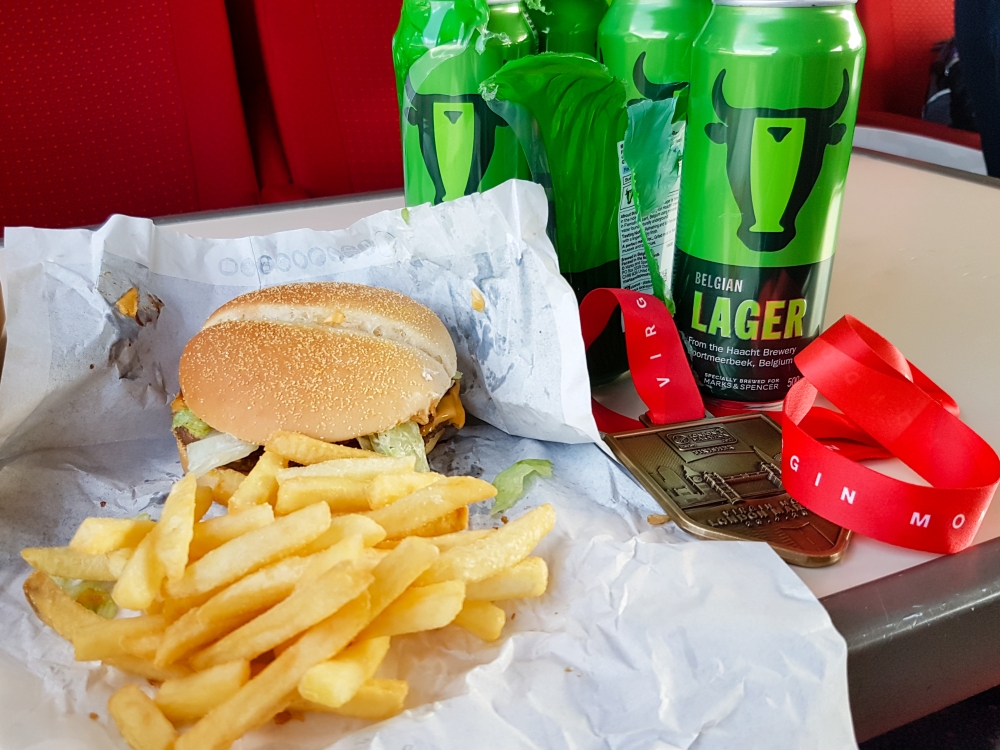 Ok, perhaps there were two such moments: 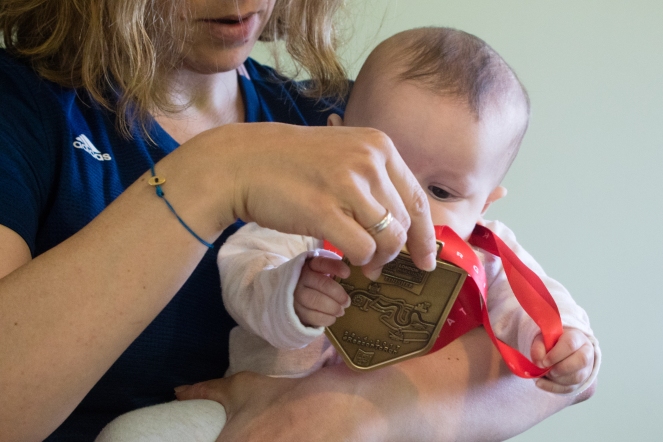 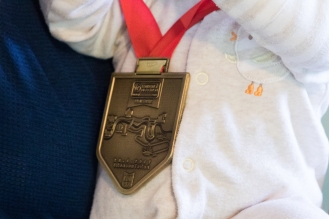 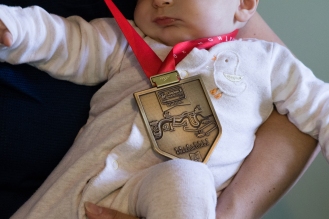