The overhaul of my training regime that is taking place over the winter was given extra impetus this week with some help from the clever people at Anglia Ruskin University Sport and Exercise Sciences Research Group in Cambridge, led by Dr Dan Gordon. They are conducting research in the physiology of marathon running (and specifically the difference between predicted finish time and pacing during a race), and had invited volunteers with a place in a spring marathon to take part.

The background to the research is given here, where there is also an invitation to take part in an online survey (with prizes for runners who predict their race finish times most accurately!)

Participants in the laboratory research would (amongst other things) undergo a treadmill test assessing cardio-respiratory fitness, which would enable the research team to determine assess their VO2max, lactate threshold, lactate turn-point and hence their individual training zones. The opportunity to gain such an insight into my fitness and the pace / heart-rate I should be training at was too good to miss, especially as my fitness has changed considerably since my last marathon last year and the long recovery and inquest that followed!

So I promptly volunteered and, true enough, I was contacted by Viviane from the research team who provided all necessary paperwork (medical questionnaires to establish how likely I was to keel over half way during the test, the usual disclaimers ensuring I could not sue them from beyond the grave if I did, and an information sheet of what the assessment would comprise of) and made arrangements for the day.

And so it was that two weeks later, Demi, Dash and I were all Cambridge-bound. Dash was along for the company, but as there would be neither tennis balls nor squirrels in the testing facilities saw no point in running and napped in the car. Upon arrival, we were greeted by Viviane and Dan and were given the opportunity to ask questions, a mistake I am sure the two scientists soon regretted! Half an hour later, I completed a questionnaire about my racing history, current training and race time prediction (ha!), got changed into my racing gear and the prep began.

The first thing I learned is that scientists have a tendency to say strange things, and pay bizarre compliments: For example when I gave my urine sample I was told “that looks great” (likewise, I guess…); or when Viviane took the first, pre-test blood sample, she told me approvingly that I bled very well. But as there was no mad glint in her eye, and no sharp implements within reach (well, apart from a wide selection of needles, scissors etc.), the test commenced.

Or at least it did after the further 15’ which it took to set me up for the test, attach the electrodes, heartrate monitor, mask, safety harness and a very becoming wet gauze (I suppose this was to prevent chaffing, although it could well be the lab assistants’ private joke).

The test itself wasn’t bad, once I got used to running with all that gear attached to me (the mask in particular restricted my field of vision somewhat, which meant I kept banging my right hand on the treadmill control panel as I ran), and consisted of two parts: In the first I ran for 3’ at a time followed by a 1’ break when a blood sample was taken to measure lactate levels. This was repeated a number of times, with the speed increasing by 1 kph on each 3’ run. 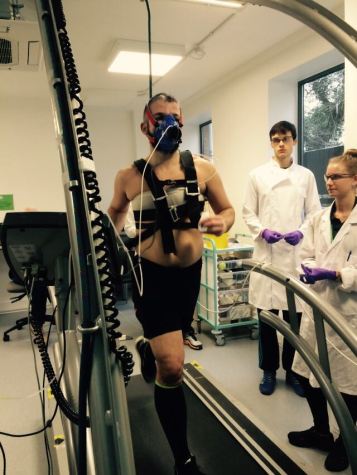 One thing that threw me a bit at this part was that close to the end of each 3’ run I was asked to indicate where my thoughts were (internal or external), by pointing to a number on a range on a large card that was presented to me. What confused me there was that my classification of internal v external was slightly different to the researchers’. So while they considered things like “thinking about muscles, how body is feeling, fatigue” etc. as internal thoughts and “singing to myself” as external, for me it was the other way round. Perhaps this is the only thing that is left of my freediving days (and a monofin in a cupboard somewhere), but I classify “internal” as what is wholly in my own mind. So visualisations of how I should run and the feedback from my body are certainly internal, but any discomfort, fatigue etc. I classify as external distractions. Similarly with singing to myself, which I classify as internal (I pick a song and repeat it over and over again, mantra-like, rather than serenade passers-by). So I ended up pointing at what would have seemed as random points on the range, causing some bewilderment.

Then, after 7’ rest, the second part started: there the speed was kept steady, but the incline increased by 1% every 1’. I was supposed to keep running till I no longer could, a point I reached a bit sooner than I had hoped: the unaccustomed sensation of panting deeply into the mask had something to do with it (there was no issue of airflow or anything, just the unusual-ness of the sensation), as did the fact that there was no end in sight: it wasn’t like a hard interval or hill that you know will end at some point and are determined to not give up before it; this would just go on. So immediately I stopped I felt some regret, but – to be fair – I could only have been able to keep it up a few seconds more at the most.

Thankfully there were changing facilities there, so after I was disconnected from the machine, I had a quick shower a0nd indulged in a calzone at Charlie’s Coffee, a nearby pizzeria which I highly recommend, before driving back home.

I spent the rest of the weekend reading the Flying Runner website (a very, very worthwhile site which the good people at Anglia Ruskin associate with – but more on that in part 2) and then on Monday lunchtime I got the results of my fitness test.